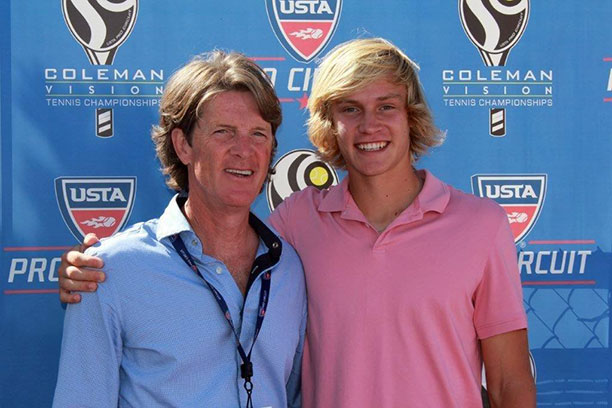 2014 marked the 17th consecutive year of the Coleman Vision Tennis Championships, the longest running professional sports event in New Mexico. Dr. Coleman, a lifelong tennis enthusiast and player, picked up the title sponsorship of this tournament, formerly a WTA Virginia Slims tour stop, in an effort to bring the future of Grand Slam tennis back to the southwest.
​
Strategically held each Fall just 3 weeks after the U.S. Open, high profile players from around the world are attracted to the near-perfect playing conditions that Albuquerque offers, in one of the most highly regarded tennis communities in the country. Over 120 volunteers come together for this annual event that the USTA has called “one of the 5 best tournaments in the country” as voted by the participating players.

The true focal point of the Coleman Vision Tennis Championships is the New Mexico Youth Tennis Foundation (NMYTF), established in 2007 by tournament director Sue Jollensten. This Foundation receives all proceeds from the tournament in order to fund after school programs for junior players throughout the state. This year nearly 1,000 young students attended the tournament and participated in various activities with professional players.

Without a doubt, an unexpected highlight of 2014 had to do with the live-streaming cameras that the USTA put in place on stadium court for the entire tournament. Former #7 in the world, Nicole Vaidisova announced her comeback to tennis at the Coleman Vision Tennis Championships and was granted a wildcard entry. On the morning of her match marking her return to tennis, 55,000 people from her home country of the Czech Republic set their alarms and tuned in to watch her live, and win. All with the Sandia Mountains in the background on a bright clear New Mexico day. What an introduction to New Mexico for eastern Europeans!
​
The Singles crown went to Anna Tatishvilli, a player known to all with a #104 world ranking. Born in the Republic of Georgia, formerly a state of the Soviet Union, she defeated Irina Falconi in a hard-fought final, 6-2, 6-4. The crowd was ecstatic as Anna had been the 2013 Singles runner-up. In the Doubles final, Jan Abaza, the tournament darling, teamed up with former U.S. Open winner Melanie Oudin to defeat the #4 seeded pair of Nicole Melichar and Allie Will, 6-2, 6-3.
Again, the weather cooperated. Again attendance was up. And thankfully, even more New Mexico youths were exposed to a sport that will hopefully become a lifelong passion!